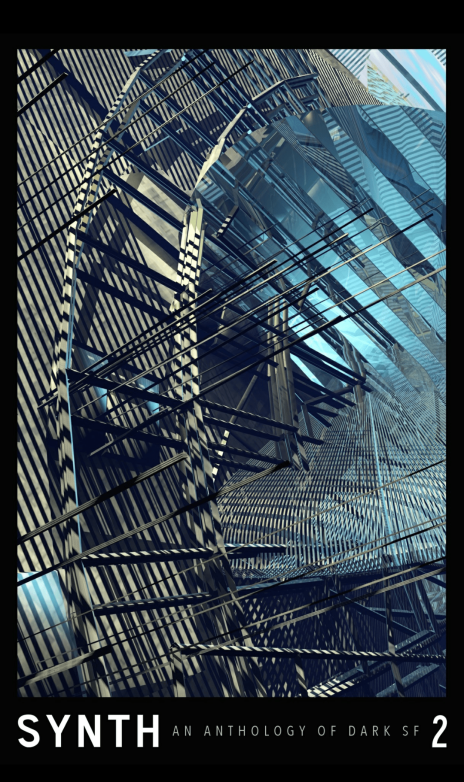 I reviewed the debut SYNTH anthology back in April and I really couldn’t wait to dive back into this series curated by C.M. Muller.

Volume 2 of the SYNTH: An Anthology of Dark Science Fiction carries on the tone of the previous volume, but considering how high the bar was, it just did not reach that height as a whole. This is not to say that I did not enjoy it, nor does it mean that these stories are not worth giving a read, there are some lovely new voices here as well as one returning author.

These all still embody a sense of the dark, bleak sensibility that Muller describes these volumes to be. A mixture of Black Mirror, PKD, and others of weird, scifi lit will find their home here. I thought some of these stories relied too heavily on the “Black Mirror-esque” kitsch  of tweaking only one thing, while ignoring the rest, but we’ll get to that.

“Concerning the Deprivation of Sleep” by Tim Major is an almost meta-fictional story of a science fiction author attempting to care for his child after his wife’s death. The city surrounding them is oppressive and they are cut off from their neighbors by the walls of their apartment. The feel of this story is slow moving and one that starts the slow burn that this anthology creates. Major’s writing is careful and particular, while maintaining both emotional intimacy, but distance from his main subject, the father. It’s a saddening, but masterful piece on loss and anxiety.

This was one of the few stories that I was flabbergasted by the world building. “Infrared” by Casilda Ferrante is an amazing aside of what happens when an individual chooses to do the unthinkable, breaking tradition.

We follow the main protagonist after she has undergone an extreme surgery, of which she will then be sold to the highest bidder. This is a world that is both a mix of post-apocalyptic, cosmic horror and biopunk intermixed to create a world that I achingly wanted more of by the end. I cannot say more, otherwise, I would spoil it, but I will say, I won’t look at animals in quite the same way.

Dan Stintzi returns with “Daughters of the Void” and it was another imaginatively existential dredging. Marion wakes up to a robot caring for her and finds herself on a predetermined path to explore a planet she does not know, to study something she cannot comprehend, all guided by machines with an enigmatic priority.

Much like his previous piece in Vol. 1, Stintzi manages to weave intimate questions of person-hood and choice, while unpacking an often cruel and dark world surrounding. The ocean world that Marion inhabits is vivid and the things in the deep are…disturbing.

Breaking from these stories of loss is one that gives the volume its only spot of hope, “US” by Stephen Oram. In this world, humanity has evolved abilities of empathy that in some ways become telepathy. This is because nanobots now reside in human’s stomachs and provide all the nourishment they need, that eating or speaking is no longer a thing.

People “feel” emotions in a visceral way to such a degree that people can share there memories and images through them.  Human contact is quick and sincere, even among strangers, because if you can feel their intentions, where is the fear? It’s a true Black Mirror-esque story in that way. Oram’s hero is dealing with grief over his wife’s death and has isolated himself, despite the repercussions it takes on his body from lack of contact or social interaction. It will take courage for him to leave his apartment, the question is, can he do it?

“Scores” by Selene dePackh is an excruciating drama filled with past history, spurned lovers, and the struggles of disability. Chill and Dax, husband and wife are brought into the barracks so Chill and prove his sharpshooter worth, over an upstart. The couple’s standing in the post-apocalyptic, cyberpunkish world hangs on this decision, yet Dax feels useless if not only an accessory to all of this, despite Chill’s encouragement and small signs of affection. It’s a dialogue-driven story about what people do to each other and how we choose to treat one another, even in harsh conditions.

J.T. Glover’s story, “Questionable Things” was one of my favorites in the anthology, which follows Carl Jeffson, who is a PI called in to find a serial killer, who calls himself a “Blade Runner.” Set in 22nd century Seattle, this short story is a nostalgic trip down classic cyberpunk noir lane. Jeffson is a fun, but brutal man, who of course has enough sentimentality to be invested in the carved-up bodies of little girls he finds along the way. It’s not a story for the squeamish, but the pay off is almost as good as what Jeffson is promised.

Following somewhat in the footsteps of Heinlein’s STARSHIP TROOPERS, “Remnants” by Tim Jeffereys is riffing off a theme of mega bugs and the people who fight them. Left behind on an island and cut off from the mainland, Gabe is trying to find a way off. Meanwhile, Renzo, the brutal leader to their crew is hellbent on eradicating every “roach” they find. Gabe has other plans because one spoke to him once. A mixture of desperation, survivalism, and empathy, Jefferys’ manages to pull together strange threads through that ultimately lead to an interesting conclusion.

“Better Places” by Zandra Renwick rounds out this anthology and it carries with a surprising amount of depth and cultural critique. Grant, a luddite carpenter, finds himself locked out of having any sort of relationship with his wife and daughter. Both are hooked on “ReelTime,” which is a virtual reality played out through their “Fones.” He finds himself only an accessory to them, powerless in reaching them or becoming interesting to them.

While somewhat glib, Renwick’s attention to Grant’s frustration and isolation is a powerful insight to our own current cultural traditions of social media and our fears of missing out on certain experiences, while online. The story may seem trite to some readers, but it carries a poignancy that should not be understated nor passed over. Renwick proves in this story that she is not one to sleep on.

So, if any of those seemed to have struck your fancy, don’t miss out! Check it out here!