I am back on a graphic novel kick and decided to give ROUGHNECK from Jeff Lemire a try and it was by far one of the best things I have read in recent months. Lemire’s writing is sparse, but beautiful, leaving room for his two-tone illustrations that are occasionally spotting with bright red blood. I read his Descender series recently and loved the themes and here it seems Lemire dives deeply into new, deeply intimate themes of abuse, forgiveness, healing of heritage, among others.

After Derek Ouellette’s hockey career ends prematurely after a brutal incident, Derek has been scrapping by in the small community of Pimitamon, in the far north. He drinks, brawls, and is in a free-fall spiral of self-destruction. When his little sister, Beth, shows up in town, running from her controlling and abusive boyfriend, the two siblings begin to reconnect. As the years fall away, they begin to address the many scars they carry and start the healing process of t heir family’s trauma and their Cree heritage. But, as Beth’s ex hunts them and draws closer to their small slice of home, he may destroy everything that Derek and Beth have begun to build between one another. 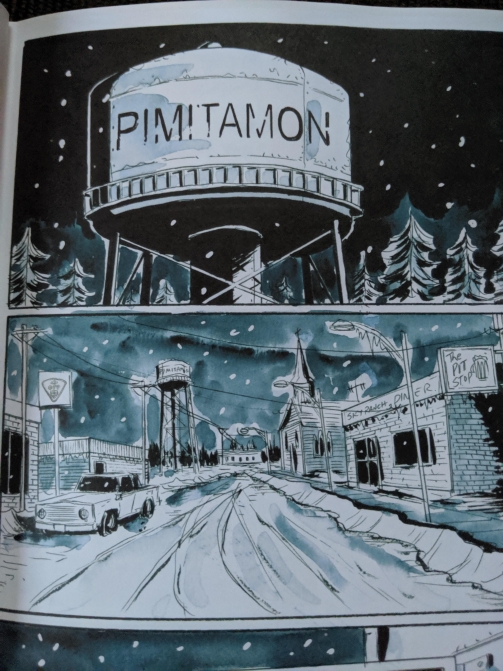 Derek is haunted and deeply wounded, carrying the burden of generations of toxic masculinity and abuse. He lashes out constantly and is generally an asshole to everyone. You aren’t sure what you’re in for until Beth arrives on the scene and a whole new dimension of this “roughneck” opens up and we are immediately tied to this broken remnant of family.

Derek and Beth’s father was the raging drunk and abused their mother, both physically and psychologically. It was not until a terrible event that their family was rent into pieces and both kids went their separate ways. As someone who comes from a family with a completely mentally absent father, I felt the echoes of some of these wounds. The lack of support. The lack of a male role model. The anger at taking the world on by myself. This is a thread that runs through the book and becomes the main focus in act three where both Derek and Beth complete their respective arcs, and ultimately healing moments, where they overcome these points of abuse, trauma, and fears.

DO NOT READ FURTHER IF YOU WANT TO AVOID SPOILERS

Derek and Beth’s mother was indigenous and while Derek treats this with some disdain when speaking with Al, a friend of their deceased mother, there is a “coming home” element at play. By the end of the story, we see Beth and Al on their way to the reservation where her mother was from, a place that Beth nor Derek had gone. Yet, when Al takes Derek out on a moose hunt and Derek takes the life of the moose, there is a moment that all of his trauma becomes clear. Does he still struggle with his anger? Sure, but by the end of the book, he sacrifices his body and takes the beating of his life for Beth. Everyone can have their justice rather than Derek taking selfish revenge, which would have only been self-defeating. 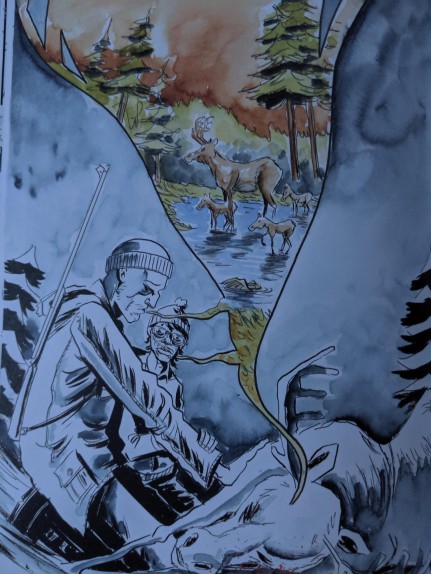 It is really this last moment scene that launches this book into a new realm for me. This was a radical act by Derek of self-sacrifice and self-healing. He takes all of the evil that has been done in his life and Beth’s and places it here in this moment to let go. It doesn’t control him anymore. It doesn’t drive his motivations. It is purely so that justice will be done. Luckily, the police are just behind him and take the ex away. Derek breaks the cycle of self-destruction and violence, which is a beautiful, revelation to read. So few stories dare to tackle such a hopeful, yet hard story, yet Lemire makes it look easy.

Basically, I’m saying you need to read this as of yesterday. Do not sleep on this grand slam from Jeff Lemire!

One thought on “Review: Roughneck”