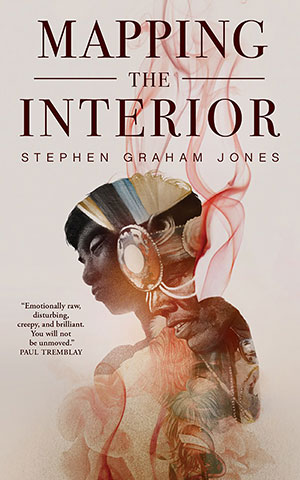 MAPPING THE INTERIOR is a genre-blending novella of incredible depth. Stephen Graham Jones, an accomplished writer of horror, strives to present a heartfelt tribute with a variety of themes and messages that will sear the heart cold.

When Junior sees the ghost of his long dead father, he begins to unravel a mystery that surrounds his father’s mysterious death that led them to leaving the reservation. He finds their house may be far more than what originally meets the eye. And once he discovers what is at the bottom of this dark and mysterious question, he may realize the cost is too great.

Buried in layers of poetic prose, Stephen Graham Jones uses so much technical skill to drive the reader down into the very heart of a coming of age twelve-year-old. Despite, Junior’s life being so far removed from mine, there were echoes of the boy I used to be. The boy who was afraid of large viscous dogs, the boy who watched out for his younger brother, and the boy who resents his absent father.

Alongside this, is Jones’ attention to heritage and the burden that Native Americans bear now, in the face of their displacement. So much emotion is wrapped up in these 100 odd pages, that it takes a certain amount of stamina to push through. If that isn’t enough, Jones combines horror, mystery, and strains of weird fiction, all blended together to create a spiraling story of redemption, family, and pain.

3 thoughts on “Review: Mapping the Interior”