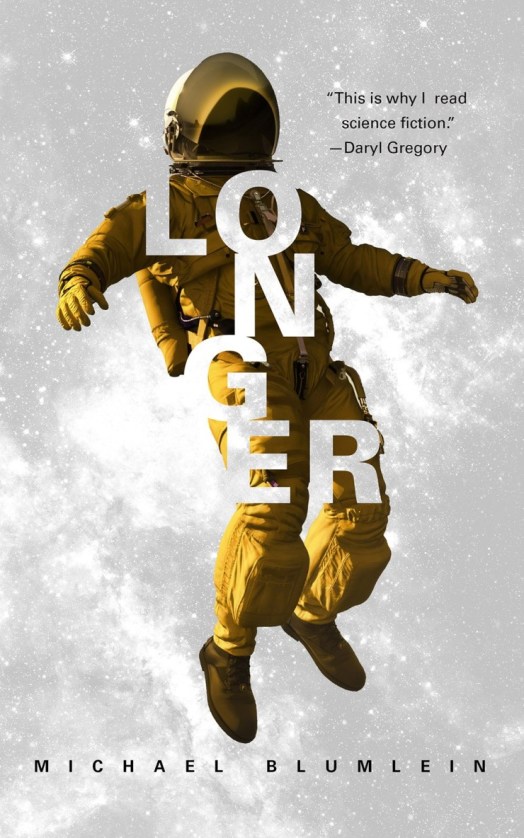 I wanted to like this story more than I did, but LONGER by Michael Blumlein, just did not land in the ways I wanted it to. A nominally quiet sci-fi that wants to deal with larger issues in benign ways(for science fiction), you would think it would follow my taste, but this was not the case.

Cav and Gunjita are researching new pharmaceuticals employed by Gleem Galactic. Alone in an orbiting station, Gunjita “juves” for her second and last time. Cav opts not to. Both of them have access by being wealthy enough to rejuvenate, which springs their old bodies back to their twenties. It’s a new lease on life. You can only do it twice though, after that it’s a risk. When an unidentified object comes within reach of their station, Cav becomes obsessed and with the idea that they might find alien life, consumes him. Their marriage might not be up to the test.

Blumlein’s writing is airy and poetic. His dialogue wry and sparse. He does not leave much on the page, so there is plenty of reading between the lines. For some readers, this may be an issue, since some at least want some signs as to what they are reading. Yet, with Cav and Gunjita, it is often what is not said that echoes out farther. In, many ways it is what is the best part of this story.

There are a lot of themes that come packed in this story, everything from death, to immorality, to marital relationships. And yet, Blumlein doesn’t lead me to believe that he could work with all of these themes. He leaves some of these starkly behind, even having touched on some for over half the story. And there are even some unfortunate limiters as to how far-reaching a technology “juving” is. It would seem that the rich have access to extend their lives to over 200, yet there is only lip service about the “haves and have-nots,” which is such a missed opportunity.

The relationships between Gunjita, Cav, and Dash are complicated and weave among each other as much as any spider’s web, but the reader may be left feeling…who can they root for? All of them are self-absorbed, seemingly unconcerned with one another and are their own self-saboteurs. Maybe this is how Bllumlein offers his critique of artificially extended lives. Maybe humanity isn’t meant for this, but sadly it isn’t offered strongly enough to make us feel anything.

This story may not have been my ideal read, but for people who enjoy hard science fiction or a story like I outlined, don’t be afraid to give it a go!