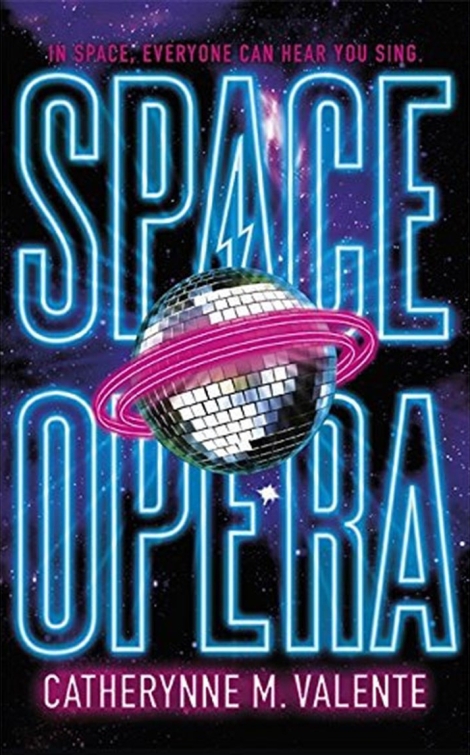 Our next Hugo novel finalist is here!

SPACE OPERA by Catherynne M. Valente is a fun little book. It is filled with absurdity of Hitchhiker’s Guide and all the glitter of a every single glampunk band from the 70s. Valente has managed to construct a overly flamboyant and somewhat humorous satire of humanity and life throughout the galaxy.

Humanity has discovered they are not alone and now have to prove their sentience in the Metagalactic Grand Prix, a mixture of gladiatorial fighting and American Idol, except it includes every conceivable alien civilization in the galaxy. If Earth fails to measure up, life is over as we know it. Enter, Decibel Jones and the Absolute Zeroes, washed up has-bins who used to really rock the cash bar. They will have to truly wow the judges in order to save humanity, but can they overcome their differences and sing something truly great?

Valente’s writing is some of the most imaginative that I have read in years. The alien races are all so startling unique, yet somehow recognizable. Decibel Jones and the Zeroes are fantastic characters to follow along, especially as the existential reality of the contest settles in. For such a humorous book, I was unprepared for the intimacy that Jones and the rest are able to reveal through small turns of phrase, amid the increasing surreal reality of their situation.

On the flip-side of this, I believe the prose and exposition to be somewhat overdone. Her sentences bow with being overburdened at times, which is more a stylistic choice. Some of this enhances the overall tone of the book, which is to maintain a somewhat petty British undertone in the tradition of Douglas Adams, but at times it may kick the reader out by remaining obtuse. Mileage may vary here, especially if you enjoy the humor, of which there is a lot. There are also entire chapters of exposition and world building that were fun for myself personally, but tended to insert distance away from her lovely characters, Jones and the Zeroes.

All of that aside, this is a marvelous, glittery story from Valente. The sequel will not be out until 2021, but I’m sure I’ll be returning to this oddly hilarious universe.