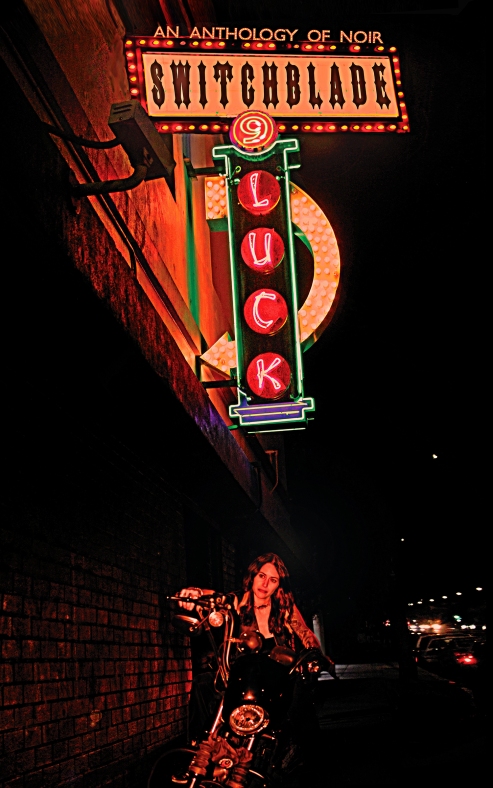 Switchblade is a relatively new magazine (to me), but one that I’ve been itching to read. Low and behold when they dropped their first color issue with #9, I had to pick it up via my e-reader.

Not for the faint of heart or the soft in temperament, these stories encompass, vengeance, revenge, injustice, and vice. Switchblade, true to it’s name, is quick and dirty when telling stories of crime noir and they do not pull punches or stabs for that matter. It is bleak, brutal, and bloody. Despite all the grim, brooding stories, it comes packaged within a handsome and crisp layout, which was a pleasure to flip through.

I’ve listed some of favorites below here, but also please go check this one out for yourself!

Aside from a ridiculously great title, this story follows one man, Cooley, as he narrowly avoids death and worse multiple times during what one would think is the unluckiest time of his life. It all starts when he is sideswiped by a car while riding his bike and ends up in the hospital, but he at least knows who hit him. The police get involved and it only escalates from there.

Bates does a great job maneuvering a short story that took more turns than a first time driver in NYC. The sentences are terse and abrupt, while Cooley is a cheeky narrator who just wants to be left alone in peace, but everything is working against him. There are some great reveals and an unveiling of our main character’s past as this short story goes along. It gives a great first taste of what to expect from this issue.

We get to follow two miscreants for this story; Quarry and London. The former seems to be on the warpath for righteous vengeance, while the latter is seemingly just trying to pay his dues. What follows is how their paths run parallel, until they collide in a shocking climax.

Slade does a wonderful job with these two characters and gives each of their parts, a very distinct tone and flavor, while still remaining within the noir genre bounds. The uneasiness and tension increases throughout the story as you assume the two men will meet is masterfully measured in the pacing and brings it to an unexpected revelation.

Hank Harris is going to visit his sister in Portland and taking the old country roads from Boise to get there. He makes a pit stop and comes upon some convicts in transit with two cops. Being an ex-con himself, Harris takes it upon himself to do something about it…

Told in a vein similar to Flannery O’Connor’s “A Good Man Is Hard to Find,” Risemberg has created disturbing piece of noir with misanthropes, criminals, and a man who is just bored. This had another twist I wasn’t expecting at all and being set outside of city limits was an exciting take on more “rural noir” that kept this issue fresh.

This story opens with a scene of intense violence committed by a priest. The priest, Simon, seems to have more under his collar than only holy orders and goes on a vengeful bender when a young prostitute turns up dead on the street and the cops want nothing to do with it.

This was particularly nice story with the inversion of the “priest” trope, while also taking on some broader urban issues that plague noir and city life itself. Rohr’s writing is starkly elegant and his scenes of violence are quick, concise, and clear. They don’t dwell on the brutality, but instead focus on the effects. A lovely, but ruthless short.

“Squaring Up with Eddie” by Fred Rock

This is the first flash story in the issue and Rock delivers with a quick snapshot that tells volumes of history and betrayal all within seven pages. The main protagonist is never named, but he attempts to retrieve his lover from the crook Eddie the Snake. He just has to get through a bodyguard to do it.

Word count with flashes are so key and even when it seems that character conversations are trivial, what is happening is the building of tension and the pacing, which Rock should be commended for. This story could have easily stretched out over a dozen or more pages, but being kept to a slim word count only strengthened not only the prose, but the overall plot arc. It was truly a pleasure to read.

One thought on “Review: Switchblade Magazine #9”