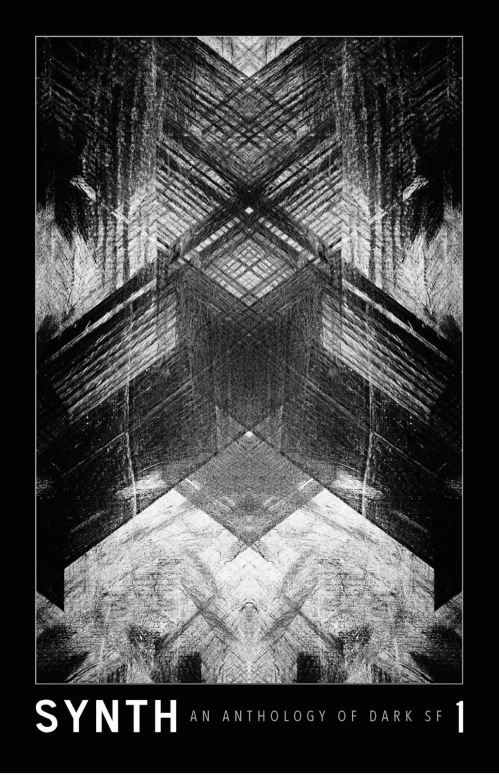 The blurb compares this to Blackmirror but I’ll be honest, I think anthology wins at being more bleak, more strange, and more relevant. Edited by C. M. Muller, SYNTH: An Anthology of Dark Science Fiction is exactly that and does it ever deliver on that promise. All of these stories circle existential issues, while also embodying the sense of weird, horror science fiction. There’s plenty for anyone who is interested in those sub-genres as well as stories that embody genre fiction done with a literary sensibility.

This first volume is impressive and while some of the stories landed well, others stumbled, but all were uniquely compelling in their own right. Looking forward to the next volume.

This is a dark post-apocalyptic tale of a broken family, dealing with the death of their child after an accident. The father, Emmons ventures out into the frigid, lawless landscape to find the enigmatic SURROGATE, who may have the ability to resurrect their son.

The prose of Stintzi is stark and brutal. He hardly leaves anything out, in order to paint this desolate, shattered landscape of a world trapped in winter. The struggle of Emmons is what frames this story and is done in a sincere, driven way. In many ways, this seems like the perfect story to begin the collection with since it brings exactly the tone that Muller wants to envoke. Dark, brutal, and tragic.

Flow to the Sea by Steve Toase

Involving more of a hard scientific premise, we follow Maja, an expert of using biomass to create data storage. The reader finds Maja in the midst of transitioning a beached whale when she is approached by powerful men and forced into an agreement with them. Unknowingly, she follows in her missing mother’s footsteps to a revolutionary discovery.

While it may be hard to suspend belief of using real organisms as biotech. These tools are used to great effect, and the way Toase uses description to explain the process is both repulsive and compelling all at once.  Engaging in both dark descriptions of dead carcasses, while using visceral images of the bio-reactions and transfer, it all makes for a deep read.

House of War by Virginie Sélavy

The story begins with a confessional by our narrator who is attempting to tell us a story before his mind becomes lost inside a false reality. He speaks of a new “experience” titled HOUSE OF WAR that his community has been non-stop talking about. It involves two armies; the United Federation of Allies and the Army of True Faith. Somewhat World War-esque, the narrator joins after his friend Jack urges him to play. As each session goes by, our narrator reveals he is slowly losing grip on his present until it all unravels.

Stories that involve virtual reality are a hit or miss for me, but Selavy does a good job in engaging directly in how actions in a game compounds to effect the mind outside of play.  There is plenty of internal struggle here and some great insights into what it might appear to lose your grip inside a game, while also being horrified of it. The prose in this is crisp, despite the intimate darkness of it all, fans of such concepts of virtual reality in fiction may want to check this one out.

Music in the Age of Sheep by Charles Wilkinson

Much longer than the others so far, Wilkinson’s story calls to mind the same sort of dystopia s found in Lois Lowery’s The Giver or Orwell’s famous 1984. Instead, the offense here is music. Our hero, Athens is a rising star among the “Readers”(the ones who can/allowed to read music), but there is one problem. His son beats to a literal different tune. The fallout of this is the driving force of this story. Also, there are giant sheep everywhere.

The human drama is rife through this, if not filtered through the conflict over deviating from certain harmonies. Athens’ internal struggle and slow realization of how limited his civilization is realistic and personal. Wilkinson goes to great lengths to show how unsettling these rules can be. The giant sheep also put a nice, almost surreal flavor to this story.

Taking a larger leap into both the weird and an almost pseudo-space opera, Smith’s story pushes not only genre boundaries, but short story limits. Palladia is a woman who is kept watched over by denizens of another planet. She is virtually a prisoner, but keeper of the eggs of Nabryd-keind. Her world is grey and the eggs are the only splashes of color, of which her captors cannot comprehend with tiring. Everything changes when Pseussor, a tyrannical ruler comes for Palladia.

This story actually requires numerous footnotes to fully appreciate the terms, titles, and references Smith uses throughout the story. It’s a rich mythic narrative that most careful readers will enjoy digging into as they go along. A blend of both space opera, weird and dark fiction, it’s truly a wonder.

The Transported by Jeffery Thomas

Thomas’, THE TRANSPORTED, tells the sad story of Malo L’Orange, who now unemployed from the Paxton Teleportation Center, has resorted to making and selling drugs. The catch is that Malo is haunted by someone, Ete-tomi, and in between urges from  his addict behavior, attempts to reach out to them.

Set in the wild setting of Punktown, Thomas’ world unfolds as various species struggle to coexist together alongside humans. The world building here is fantastic and clearly realized, while how Malo creates his drugs is equally grotesque and unsettling. Despite this, the story itself is very compelling with how well Thomas writes the mind of an addict and the mind of someone who ultimately alienated someone because of that flaw. It could be argued that the story ends on an actual hopeful note.

This story takes the reader deep into the Bible Belt of the South and follows three parallel narratives between, Sally, Jerrod, and Emile. They are all conducting their own private business at a firearms fair, but are all drawn together when Sally kneels down, asking for God’s help in asking for a refund. This act of both pleading and supplication pulls the reader down the path to understand these three individuals and their unique connection to one another and guns.

Miller’s writing is astounding, reading effortlessly and paced perfectly. Each of the character’s narratives is unpacked quickly, while also with startlingly intimacy that reaches down to doubt, suffering, and regret. While, the story could be seen as a commentary on gun ownership, a superficial reading such as that does an injustice, since Miller’s concern is with each of the character’s motivation to use a gun in the first place. All while pulling them together and revealing their intentions as mere mirrors of one another. A well drawn thematic piece.

The Object of Your Desire Comes Closer by Joanna Koch

The last story covers the tragic tale of a Minister of Earth and his love, Fay-Lin, on a generation ship through space and time. What no one counts on is a mysterious substance found on the hull of the ship and the shear overpowering obsession one can feel when ripped from the planet of their birth.

This seems like the perfect story to end on and Koch’s imagery and brilliant handling of the psychology of the Minister is fantastic. The premise of a generation ship is ripe for this kind of isolating, claustrophobic horror. The sense of loss and hope just out of reach is tangible throughout this story as the Minister struggles to retain some shred of his love for Fay-Lin and his sanity. It is truly a moving story.