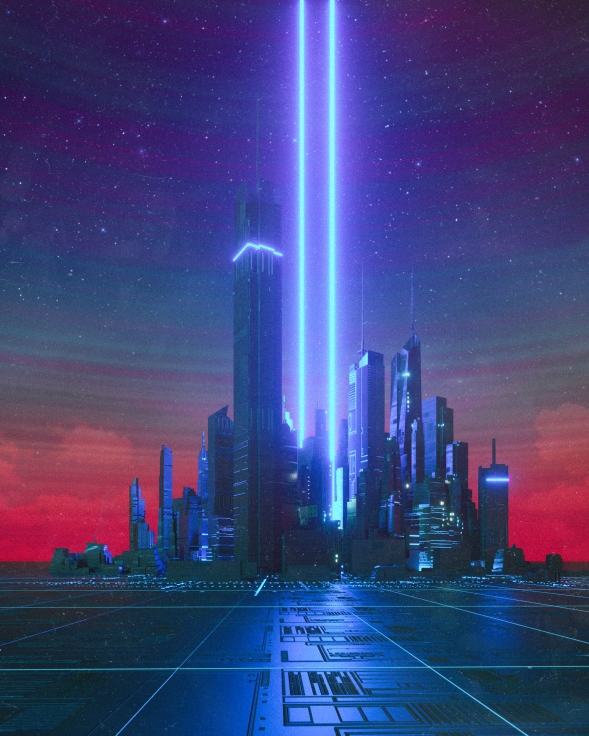 So, I’ve been following this series for awhile and since stumbling on it and falling in love with it’s theme and mission, I became friends with the author behind it all, Richard Galbraith. He’s a pretty cool guy, who has a lot of creative projections going on across several different social media platforms & sites. Check them out if like what you see from him. He’s one of my favorite writers of short, flash, and micro fiction right now.

This is a cross discipline collaboration, since Galbraith takes his inspiration from various images that are created by 3D render artists and he paints a word picture with them. Considering that I am also fascinated by this project, NEON & CONCRETE, I was honored when he asked me to review what he had done so far.

This first post, of which he collaborated with Beeple on is his NEON strain of stories now. Set in a far-future United States, now become a mega city called, Major Prime, these stories are inspired in part by the Outrun genre of music and aesthetic, along with heavy cyberpunk/neo-noir elements.

I recommend looking at my reviews below and if one seems to tickle your fancy, go read it! They are all short stories or borderline flash, so ones you can basically read in one sitting.

*Disclaimer* – These stories are brutal and filled with graphic violence in places, so if you are triggered by that or have an aversion to that sort of thing, be aware.

Anyway, let’s get to NEON:

The Suppressor – First story in the series, it is an in-your-face manifesto of the “haves and have-nots.” Narrated by our “hero” if you want to call him that, is the Suppressor, or the guy who helps those who’ve drawn the short stick. The world has gone to rot as everyone has been given the “gift” of having a real time status of how many heartbeats they have left. Naturally, this has led to radical social change and divide, if not borderline collapse. This is where our guy comes in. He has the tech and gear to slow a person’s heart down, effectively giving them longer life. And he does it, although he’s not a good samaritan by any means.

Crisp and precise, Galbraith is able to embody the street talk that could have been said by extras in the background of Blade Runner & Blade Runner 2049. It just cuts through with a quick pace that you’re compelled to get to the end. And if that wasn’t enough, he is able to sum up social ills with effortless ease like this:

Put a finite amount of time on a person’s life and they start to do all sorts of crazy shit. Worst mistake they ever made if you ask me, but what the hell do I know? We all gotta go some time, right?

Double Brutal – Word of warning, as if the title wouldn’t give it away is BRUTAL. There’s no shrinking away from the violence or blood or guts in this one, so proceed with caution if you have a weak stomach. That being said, this is a classic revenge/retribution story of when a gang or rather “neo-cult” decides to turn on one of their enforcers only to have it backfire in their face. If you’re a fan of John Wick or pretty much any badass tale of that nature you can’t go wrong with what Galbraith offers here.

Something that I do really enjoy from this story is how moody the writing can be in the quieter moments. Take this passage:

This place, this metropolis, four billion people jammed in-between all this neon and concrete and everything that goes along with it. We’ve got two and a half thousand miles of the future here, and I’ve managed to cut myself out a tiny little piece.

Cigarettes & Dynamite – Taking a slightly different take, but still remaining within the neo-noir genre, Galbraith writes a slightly twisty rescue mission. Wild Cat, our heroine and a telepath is recruited by a crew of criminals to save one of their own. Little does she know that she becomes such a keystone to their success.

This pulpy story did take the projected path that I thought it would when I sat down to read it, but I am thankful it did not. Full of the violence and action that marks these stories, Galbraith breaks down more of his world and what this cruel, brutal world looks like. I will say that this one ends in a place where I really wanted a little bit more.

Acid Commando – I have to start with the opening passage from this story:

I pause to look at the mega-skyscrapers towering over me, their ethereal glow radiating in the iron dark night sky. A plague of drone’s hum between them as a thin layer of snow starts to make its way down to me, gliding between the concrete hulks over this quadrant of Major Prime. I stand and watch and use the moment to bury it down, the ghost of the past.

This sets the tone as we follow, Lucy, the Acid Commando, carry out a job delivering a child with a special gift. She’s a veteran of wars before, reduced to a gloried merc, but one that follows the code that all Vets do in order to survive the cruel and amoral world they inhabit.

This one was in some ways slower than the rest, because Galbraith takes the time to get into some of the nitty gritty with Lucy and delve into what makes her tick and what drivers her to tock. The plot is a classic one, but renewed with the weaving of the neon drenched scenes and enmeshed cybernetics. It’s interesting to see how Galbraith has taken a new turn with this story and it will be exciting to see what comes next for NEON.