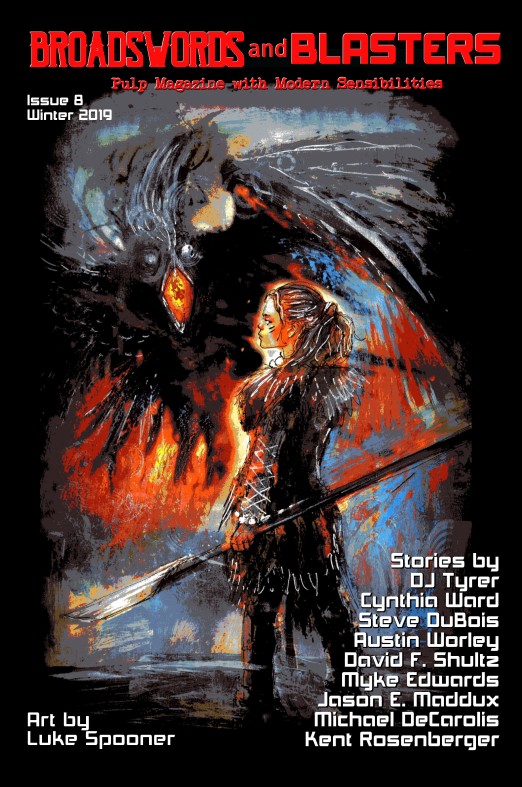 I had the pleasure of reading a recent issue of BROADSWORDS & BLASTERS for the post today and it has been awhile, since I was exposed to such a rich variety of pulp fiction! What a wild wild ride!

I’m going to post a “mini” review of each story below, since they are all too varied and different to really comment on the issue as a whole, but what I can say, is that editors Matt and Cameron really have excellent taste. They were also nice enough to send me this issue to peruse and I was pleasantly surprised.

None of these stories ended exactly the way I thought and all of them carried their own personal mark of not only the genre, but a strong authorial voice that is rare to find in most short fiction to day. The fact that such strength in tone and style can come through pulp subject matter, is extremely satisfying to see, but I don’t want to delay any further…

Now to get to it!

A neo-classical story, there are a lot of flavors that Shultz packs in here, but there is a vague flavor of Odysseus’ myth throughout. The action scenes are crisp and the prose breathlessly runs through scenes with all the fury of a swordsman in battle. It was an interesting way to begin this issue and one that drew me in immediately.

We follow Addrassus who has been alone on an island, well a glorified rock at sea for a number of years. He alludes to how he has survived, with the mention of bonewell and it stays with us as he is rescued by his son as fate would have it and brought home to save his wife from power hungry suitors. The story in some ways very much reflects Odysseus’ homecoming, right up to Addrassus’ return, though Shultz’s prose sets a new fire into this myth, making it come alive.

“Temporally Out of Service” by Jason E. Maddux

Maddux tells a quirky tale of almost Twilight Zone quality, involving a P.I., a time traveler, and cake. This one was fun, since it carried a noir feel, but something more that I cannot even now place. The story at times does feel a little more drawn out than I would have liked, especially when there is the “jump”, but the amusing twist at the end makes up for the slow ride.

We follow our P.I. as he stakes out a small hotel and ends up pursuing his quarry inside. It is not until he takes the ‘temporally out of service” elevator that he finds much more than he bargained for than simple retrieval.

“Buzz or Howl Under the Influence of Heat” by Cynthia Ward

Ward’s story is a brutal and tragic tale of a boy’s relationships to his family and friends. There’s a lot that seemingly goes into this tale, though Ward prevents this from becoming purely a character study. As the reader, you aren’t sure where it’s going, but by the end it seems to have all made sense, if you can follow that.

Andy “chickenshit” McCleary is a bullied, abused kid. Their house, once surrounded by farmland is now encroached upon all sides by neat suburban type houses. He isn’t a well liked or an incredibly bold child, but in the midst of one sweltering August day, after being pushed to the brink, Andy finds his fire.

“Talons of the Snatcher” by DJ Tyrer

Tyrer’s tale here is a really fun one, if not kind of heartbreaking towards the end. The plot is seemingly pretty simple, with a monster and a monster hunter, but as the reader soon finds out, maybe the hunt isn’t so simple after all. This story blew by for me, which is truly a skill, though by the end I wanted to know what was next for our heroine.

The hunter Nyssa comes upon a village besiged, with her literal armory she carries, including her favorite spear. After a simple survey and witnessing the taking of a goat, she decides to help the hapless villagers against the winged monster.

More satire than a true dystopia, Rosenberger builds a world that is so finely tuned down to the millisecond, yet there is a much darker underbelly to protect this system. While, the story does it’s job with presenting a rather uncomfortable, almost Black Mirror-esque situation, the main character is purely acted upon here, without any true agency.

I thoroughly enjoyed the world building here, along with the social commentary. Rosenberg’s style is intimate, especially when detailing Samuel’s unfortunate fate. That in and of itself was a (un)pleasant surprise.

It has been a long time since I have read a western and this one took me surprise, especially with the ‘weird’ factor here. I couldn’t help, but appreciate the mix of Greek mythology alongside the mythology of the Wild West, and really DeCarolis really hits the nail when setting the tone for this small yarn. This was one of my favorites in the issue.

The scene is set when a duel is begun and ended within a page and a half where the reader is introduced to our rugged hero, Colt “Thunderbolt” Johnson, whose gun shoots literal lighting. When he goes to collect his reward, it is found that the money was all stolen a week before and it is up to Johnson to retrieve his reward and bring justice to the burglars. He is joined by the sheriff’s deputy, Eugene and the two are off, and DeCarolis carefully sprinkles in the Greek mythic elements that give this story it’s spice. I couldn’t help but want more of this by the end.

“Lightning Between Your Fingers” by Austin Worley

What do you get when you mix paladins and a case to solve? Well, you get this story by Austin Worley, which is such a fun genre-blend of mystery of “whodunit,” while also including sword and sorcery action that is just plain fun. This world is a fun one, and one I would not mind hanging out more in, so I hope Worley returns in another issue.

We meet Arlise Dun and Baren Grau, two Watchers and lovers, come upon the scene of a crisped courtesan, struck dead by magical lightning. Once the two knights find a likely cause and suspect, they are off against the ticking clock, because if they cannot find the culprit in time, then only more murders will happen.

Edwards takes a classic drive through the countryside and forces the reader to confront what they would do if a “man from Mars” crash-lands in front of them. Rising from the debris is a insectoid monster, reminiscent of the “bugs” from Starship troopers and our hero and heroine are racing away, with the vicious alien in pursuit. It all leads to an incredible climax that no one could predict, honestly. Edwards takes what could have been a complete paint by numbers sequence and decides to spin it on it’s head. Along with the brisk prose, this story truly stood out from the rest.

This was an entirely unexpected, absurd surprise. DuBois gives some amazing side eye to his teaching background in this story and it truly shines. This was by far the perfect story to end on. I haven’t openly laughed at a story in quite sometime.

Set in a school for literal villains of all types, the reader follows Calvin and Dennis(can’t help but think these are homages to their comic namesakes), who have a vendetta against Screaming Timmy, a boy dressed as a tiny sailor screams so loud whenever he does not get his way. Calvin and Dennis make a pact to nix the annoying little banshee.

This may have been my first taste of B&B, but it will not be my last!