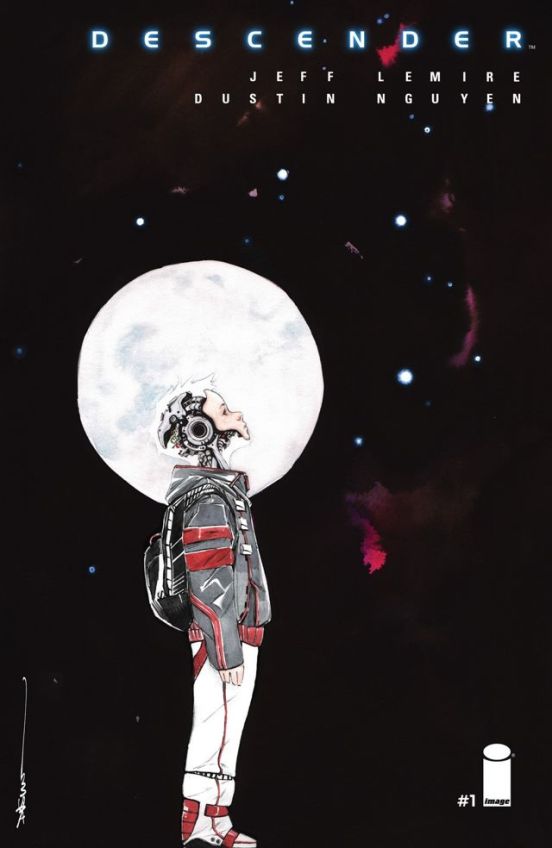 This series was an unexpected surprise. I’ve been chugging through a lot of graphic novels/comics of late and this is one that I just have to take a moment and gush about.

The Descender series by Jeff Lemire with art by Dustin Nguyen, is a fantastic space opera. While some of the thematic elements and tropes are not too far removed from what we have come to expect. The world still has a fresh, but lived in feel that feels authentic. And I can’t go any further without affirming Nguyen’s artwork, which is jaw-dropping beautiful.

There are a loose confederation of planets who teeter on the brink of civil war after being attacked by giant robot Harvesters ten years prior. We follow Tim-21 and his companions as they navigate a galaxy hostile to robotkind and there are other mysteries that lurk in the depths of space…

The cast of characters were joys to follow through even when they were pathetic bags of scrap(looking at you Quon). Andy, Tim-21’s playmate, truly underwent a full arc in this and by the time we get to the heart-wrenching end, we have fully bought in and cheer him on as he struggles to carve out peace for himself and Effie. Driller and Bandit are fun pieces of comic relief. I was also pretty consistently frustrated by Telsa, who wants to prove herself to her demanding father, but also wants to make her own way. All in all, their stories weave together to make a fantastic whole.

This just isn’t a series to sleep on, especially if you enjoy beautiful artwork, space adventure, and dealing with the human condition. There are some recycled bits of plot and thematic elements that I caught on to as the series went on, but those are forgivable, since Lemire pushes forward fearlessly with his story.

And the best part is that there’s going to be a whole new saga in the near future in the same universe(with MAGIC!) Cannot wait to dive back into this universe!