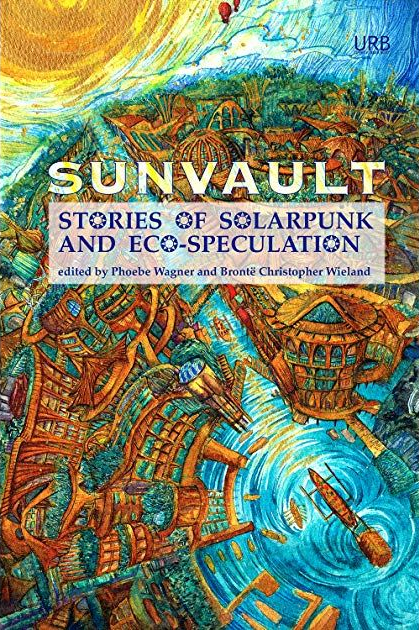 This was a very different anthology, but a good one. Edited by by Phoebe Wagner & Brontë Christopher Wieland, we have a collection of upcoming writers who were asked to write science fiction in a new way, that imagines humanities’ future in a context of climate change, far future realities, and new understandings of culture and bodies. This is all from an outlook that is relatively more positive and uplifting then what most would find in most mainstream science fiction.

Solarpunk as a new genre that is somewhat seeing a hay day, especially when our current events are much more chaotic and destabilizing then they have been in the past. Readers are daring to hope for something more and daring to imagine something far beyond the gross limitations that are being placed on our society, time and time again.  In someways, Solarpunk has a lot to share and dialogue with Afrofuturism, through it’s emphasis on innovation and idea of hope for the future.

The anthology itself is a mixture of stories, poetry and even drawings of what these students imagined and they are a unique blend of what has come from the past in science fiction and what may be in store for the genre in the future. I picked out a handful that caught me by their innovation and searing clarity of the thematic depth of this new subgenre.

The Death of Pax by Santiago Belluco – This story is full of strange biotech, but has a deeply personal story where we follow a character who no longer fits in with humanity and by the end has become something so much more. Full of strange aliens, surgical worms, and living ships, Belluco’s story has given me plenty to chew on.

Last Chance by Tyler Young – This was a surprisingly brutally heartfelt story. We follow a teacher who is tasked through bitter lessons to pass on the sins of their ancestors to a new crop of students. This is all geared so that they do not waste their resources on their planet, as what had befallen Earth, now a distant sorrowful memory. Young holds his cards to his chest and provides a couple twists that only hammer the sense of loss in this story.

A Catalogue of Sunlight at the End of the World by A.C. Wise –  Is a poignant story of a sad last letter to not only the MC’s wife, but to the whole human race. Loved the intimate expanse of this one, where it covers various distances and different events all over the globe. It’s not surprise why this story ends the anthology.

Overall, I thought this anthology was quite well done. I picked this one out for research on my own behalf, since I’d like to give this genre a try. If you’re wanting something different and maybe a little hopeful, I’d give this one a try.