Grond: The Raven High by Yuri Hamaganov is a fun YA science fiction read! All the hallmarks of Ender’s Game and even carrying threads of those foundational science fiction authors like, Asimov and Heinlein. The reader follows one of the seven Changed, bioengineered post-humans, who have been commissioned as a last hope for humanity to help cure a failing Earth. We follow Olga Voronov as she masters her skills and overcomes various tasks and tests set before her. And these are not enough, because there are those who fear her otherness and seek to sabotage her mission and doom humanity to their fate.

On it’s face, Raven High is an interesting book since it engages in both YA and some hard science fiction. I use the term “hard science fiction” a little loosely, but it does not shy away from giving plenty of science jargon and making sure that the reader understands what is going on. It does not detract from the narrative at all, in some ways it enhances it, which is to the credit of Hamagnov. There is even a strong flavor of dystopian teen fiction in this as well, considering that Olga acts as such throughout the book even if she is fully mature by age ten. There is something to be said for lack of life experience and even the escapades into virtual reality with her android caretaker and companion, Arina Rodionovna.

Something that I can dig my teeth into is the world building that Hamaganov has done. There is even a thoroughness to this as well, considering that he has set his story roughly 70 years in the future. We have already had a “first space war” and Earth has settled into another cold war. The bioengineering of humans, the colonization of the solar system, and an android revolt are only some of the tantalizing details that Hamagnov teases the reader with. Thank goodness that this book is the first of a series and I can only hope that we get more background as the books progress. This is the kind of world-building that every author should hope for.

All of this aside, Raven High is not without some flaws, although none of which hurt the book explicitly. I do believe the book begins rather slow. It was not until a third way through the book, that the real stakes of the story began to take shape. This “slow burn” I feel would have hurt the pacing of the narrative, if it were not for the back and forth between Olga and Arina. Otherwise, the way the prose reads tended to be uneven at times, especially with how quickly time jumped from chapter to chapter. This was helped by how Hamagnov made sure to label each chapter by the time table in which they took place.

In final review, Grond: The Raven High is a fun science fiction/futuristic dystopian tale that should please any reader of YA. I honestly cannot wait to read book two! 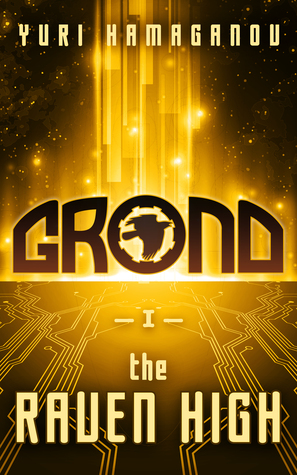